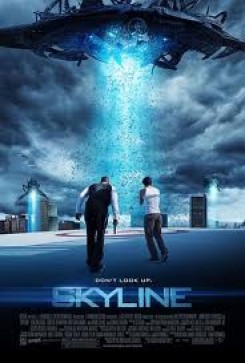 Jarrod and his pregnant girlfriend Elaine travel to Los Angeles to meet his old friend and successful entrepreneur Terry, and his wife Candice. Terry gives a party in his apartment for Jarrod and offers a job position to him in LA. Terry's assistant and lover Denise (Crystal Reed) and his friend Ray (Neil Hopkins) sleep on the couch in the living room, but in the dawn of the next morning, the group is awakened by mysterious beams of blue light. Ray stares at the light and is taken by the mysterious force. The group of friends try to escape from the alien invaders

Terry (Donald Faison) sees his elderly neighbor in the hall holding a dog. The actor with the dog was well-rehearsed for this mild action.
Later, Terry and the man hide while the man holds the dog, covering its mouth, until the dog barks and struggles out of his arms. The actor exaggerated his actions, pretending to cover the dog’s mouth hard (when in actuality, he barely put his hand there) and moving the dog to make it look like a struggle. Trainers stood nearby through the entire scene, cuing the dog to bark and calling the dog away right as the actor let him go. All grounds were inspected for hazards and sets were closed and secured. Cast and crew members were introduced to the animals before filming and instructed on their proper handling.