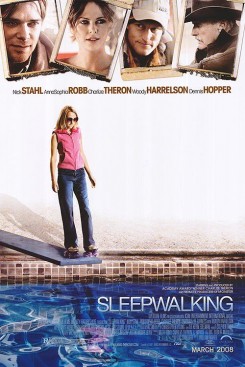 Joleen (Charlize Theron) is broke, has no job and lives in squalor with her daughter Tara (AnnaSophia Robb). While staying at her brother James' (Nick Stahl) house, Joleen takes off one morning with no more notice than a note saying she might be back in a month, leaving her pre-teen daughter to deal with this abandonment.

Throughout the film, horses and cattle are seen in pens, in a barn and wandering in a corral. These scenes took place in a secured, enclosed area with a "hot line" set up around the perimeter. Wranglers on foot and on horseback were nearby. Extensive safety checks were done, and cast and crew members were instructed on the handling of the animals before filming began. The stables, hitching posts and grounds were thoroughly inspected and cleared of debris. For mild action, which was the majority of the film's animal action, the animals were placed on their marks by trainers and filmed performing whatever action came naturally. The animals were prepared for and comfortable with the action.

Grandpa crouches next to a dead, bloody calf, and its face is seen close up. For this scene, the calf was a stuffed prop covered in a glycerin-based syrup to resemble blood.

James and Tara feed a horse two apples. A wrangler stood just off-camera, and the apples were deemed safe for the horse's consumption. The horse's food intake was limited to a healthy amount.

Cattle are seen in a field near a tractor. For this shot, wranglers used grain to move the cattle and positioned them on their marks near the tractor. Hay bales were placed on the ground for cattle to graze on and to keep them in position.

American Humane monitored some additional horse action, but it was cut from the theatrical release.