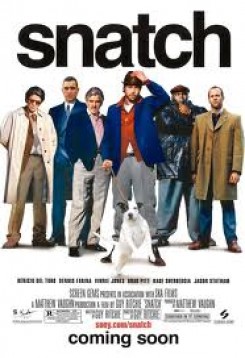 How to Snatch a Questionable Rating Snatch is the newest film from British director, Guy Richie whose first film, Lock, Stock and Two Smoking Barrels, garnered lots of attention in the UK and the USA. Both films are crime dramas that focus on violent felons and their victims. Snatch was produced in Great Britain and will be released by Sony Pictures in the US.

AHA was not present to monitor the animal action, but has received inquiries from humane groups on both sides of the pond. Prior to the release of the film there was speculation that hare coursing and dog fighting were depicted, causing injury and death to several animal actors involved. AHA investigated the allegations.
Question #1 – Hare Coursing
Hare coursing is used as a metaphor in the film to illustrate the predator/prey relationship between criminals. In Great Britain, hare coursing is not illegal and uses dogs to chase down rabbits as a means of wild hare population control. During the filming of the hare coursing scene, several hares were killed. Killing an animal for the sake of a film is not acceptable by AHA standards. However, production stated to AHA that the scene was filmed as documentary footage.
Documentary footage is often used in feature films. AHA defines documentary filming as the observation of actual events without manipulation by the filmmaker. Manipulation would include tampering with the elements such as adjusting lighting, adding actors, altering location or, in cases of animal filming, baiting the predators. Production told AHA that the hare coursing scene was filmed at an actual hare coursing event where the objective is to have the dogs catch and kill the rabbits. This “documentary” footage was then edited into the film.
Rating this film required several careful screenings. In the scene that establishes the hare coursing event, several dogs are present with the principle actors. Within this group of dogs are a couple that appear to be brindle greyhound mixed breed dogs. The dogs that are released to chase the rabbit are brindle greyhounds that closely resemble the dogs in the earlier scene. Because production admits that rabbits were killed in the event and it appears that animal actors were used, AHA has determined that the documentary nature of the footage is open to question.
Hare coursing is a legal event in Great Britain, but like all sport hunting, is opposed by AHA. Therefore, as this film meets legal requirements but not AHA’s higher Guideline standards, we are rating the film “Questionable.”
Question #2 – Dog Fighting
Several Rottweilers appear to be contestants in a dog-fighting ring. When one appears to be laying dead in a pool of blood it was actually a dog trained to lay down in a puddle of fake blood. Although there is much conversation about dog fighting between the characters, production has stated that no fights were staged for the film. Dog fighting is illegal in Great Britain.
Per reports from the production company, other dogs in the film were prepped and cued by a professional dog trainer. Several scenes depict one dog in a car as it collides with other vehicles and or stationary objects. Production reports that during the stunt collisions, the dog was removed from the car. Later, the same dog jumps out of a window in another scene, but was reportedly supervised by professional trainers.
Some Boaring Facts…
At one point in the film, a criminal kingpin details his version of the derivation of the phrase “greedy as a little pig.” He explains that pigs can be very efficient at devouring a human corpse, especially one that has died under questionable circumstances. No pigs actually appear in Snatch, although the description is very graphic.