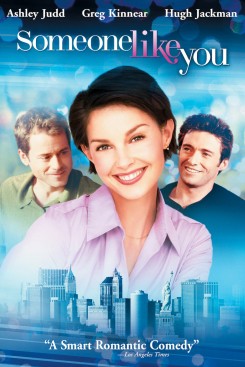 Someone Like You is based on the best-selling novel by Laura Zigman, Animal Husbandry. Jane Goodale (Ashley Judd) is the producer of a successful daytime talk show and in a steamy romance with the seemingly perfect Ray (Greg Kinnear). Yet her own predictably perfect life is turned upside-down when Ray abruptly dumps her, leaving her to wonder what exactly makes men tick. Her research leads her down an unexpected--and undeniably fun--path of discovery; hence, her new "cow theory."

During the opening sequence, cows peacefully graze in a pasture while a bull stands in a stall nearby. The bull is next seen mating with one of the cows. The bull was a 4 year-old Holstein named Forty-Four and mated with two cows, Panda and Texas, both 2 year-olds. The bull was released into a pen with one cow-both Panda and Texas were in heat-and the bull proceeded to sniff the cow and then mount it.

Next, a cow is smeared with a goopy paste said to be the scent of a new cow. The substance was actually a mixture of wheat paste, water, and glycerin and did not harm the cow. A trainer placed the animal on a stand/stay and stood in front of it to reinforce the command.

Later, two cows stand in a store window dressed like mannequins. They are donned in hats, evening dresses, boas, and pearls. The cows were Panda and Question Mark, a 12 year-old heifer. Both are very experienced and work regularly in Opera, Radio City Pageants, and the Ballet. Trainers placed the animals on a stand/stay command and they happily obliged.

Stock footage was used to capture images of different animals in the wild: elephants, giraffes, rabbits, hedgehogs, and more.