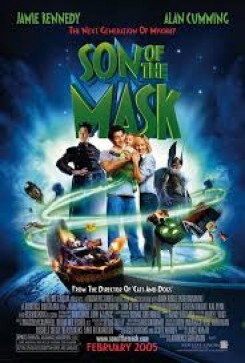 Son of the Mask

The Mask of Loki has found its way into the hands of aspiring cartoonist Tim Avery (Kennedy), whose son is born possessing some of its spectacular powers. But when Loki comes to earth looking for his "son," a power struggle of epic proportions and cartoon-like contortions ensues.

Four Jack Russell Terriers were on hand for the part of the Averys' dog Otis. Off-camera trainers used hand signals and verbal cues to get Otis to walk, sit, or lie as needed. The canine costar had been gradually accustomed to the lightweight mask, so when the director needed him to carry it, or even wear it in one scene, he was very happy to oblige.

In one playful scene, Otis balances on top of a large ball. Tim later uses a hockey stick to punt a tennis ball to Otis, who catches it with his mouth. The dog had been taught to balance on the large, lightweight exercise ball as the trainer stood nearby. Then the off-screen trainer held the ball as Otis jumped off and into the arms of the actor. The dog was also taught to catch the tennis ball in his mouth as he stood on his mark near the goalie net.

For some scenes, Otis is shown in or around a doghouse in the yard. The house was specially made for the dog and inspected by the trainer before filming began. Otis digs inside his house in one scene and exits with the mask in his mouth. He then drops the mask, looks into it, and suddenly, Otis is wearing the mask and has become a funky computer-generated dog.

These were all separate shots edited together in post production. The trainer verbally cued the Jack Russell to dig in the dirt, carry the mask out of the house, and set it on the ground. The trainer then prompted Otis to put his face down on the mask. The rest of the action came courtesy of computer wizardry.

After a long, crazy sequence with the computer-generated Otis, the mask falls to the ground followed by the real dog. A trainer held the mask and dog just out of frame and gently released both to the ground.

During a car ride sequence, the road begins to buckle up and mayhem ensues. Again, the dog and the actors were inside a car in front of a green screen and all the effects were added later. After the crazy car ride, everyone exits the car and a giant hammer chases them, smashing down on the ground as Otis stands loyally beside his family.

To set up this special effect, filmed against the green screen, the crew used a crane to suspend a large cylinder approximately five feet above the actors. The cylinder, which stood in for the hammer head to be inserted digitally later, was raised and lowered to simulate the hammer crashing down. Padded ramps were secured by crew members for the actors and Otis to run around on. The dog loved performing this action as jumping is a natural inclination of Jack Russell terriers.