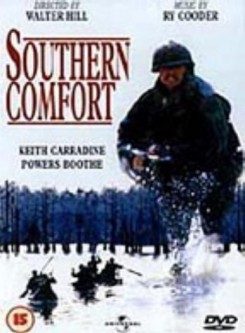 A squad of National Guards on an isolated weekend exercise in the Louisiana swamp must fight for their lives when they anger local Cajuns by stealing their canoes. Without live ammunition and in a strange country, their experience begins to mirror the Vietnam experience

Southern Comfort features local Cajun residents in Louisiana killing wild boars. The locals slaughtered the pigs on a daily basis in order to feed their families and the production chose to film this act for their movie. AHA contacted a representative from the Louisiana Film Commission who was present during the filming of the scene in question. She stated that the animals were killed "humanely:" they were first shot in the head and then their throats are slit for bleeding.

Although no laws were violated and no animal trainers were involved in the making of this film, AHA objected to the pigs' slaughter in the film and rated it Unacceptable.