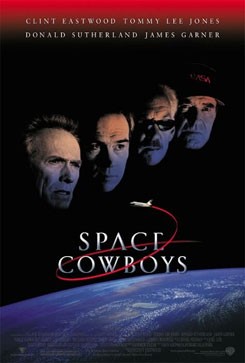 Space Cowboys is a space adventure about four senior astronauts who were once part of the developmental Team Daedalus in the 1950's, but never had an opportunity to travel into space. They were actually replaced by a monkey. Four decades later, they are called to finally serve their country as "grey foxes" in orbit. They get to illustrate to a watching world the values of maturity and the imperatives of mortality.

A Fox in Chimp's clothing! When you need something almost as good as a hot-shot space pilot, you hire a chimp. That was the alternative chosen by space programs in the 1950's. This reality is brought to the screen as the Team Daedalus pilots are summoned to a press conference to welcome their replacement - a chimp. The chimp is led to the stage and one of the pilots must do the politically correct thing - shake hands. For the scene, a trainer held the hand of a two-year old chimp named Kaos and walked him along a carpet onto the low platform that acted as a press conference stage. The chimp wore a flight suit costume that he was conditioned to wear over a two-week pre-prod uction training period. Another trainer stood off camera cueing Kaos with hand signals to smile. Kaos was rewarded with juice and other treats. Early tests on the supersonic planes of the 1950's were often conducted over desert locales. One of the scenes is filmed in such a location and for the authentic touch, a scorpion is seen crawling along the desert floor. The trainer placed the large insect and it naturally moved from A to B. After his big scene was filmed, the scorpion was carried home by the trainer to await his next role.