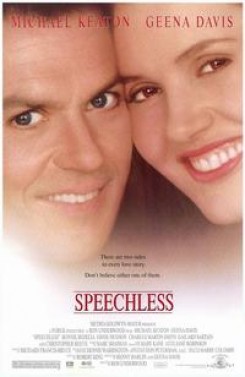 Speechless is a romantic comedy about two political speech writers who meet, fall in love and then find out that they are in separate political camps. Their competitive spirits and unavoidable attraction to each other ignite the campaign and their affair. Both Trina and Jerry are incurable insomniacs and meet over the last box of sleeping pills at a hotel drugstore while on the campaign trail. This leads to an attraction that prompts each of them to lie to the other about what they do. Jerry leads her to believe that he is a TV writer and Trina allows him to believe she is a reporter. When they discover that they are really speech writers for opposing political candidates, the sparks fly. After a series of incidents that escalate their competition, they finally fall prey to the fact that they love each other and that both candidates are equally corrupt. A sub-plot in the film involves the rescue of a baby bear who is trapped down a well. Both political camps follow the "Bear Watch" on television, which at first appears to be merely a human interest story and frustrating because the local newscasters choose it as a lead story over the political race. As the competition between both the candidates and the lovers escalates, Trina finds a way to use the story to her candidate's advantage. She arranges for her candidate, Wannamaker, to be on hand as the baby bear is rescued so he can glean some of the credit. This makes Wannamaker appear to be the man of the hour and a great humanitarian. However, it doesn't take long before his true colors are exposed.

For the scene in which the baby bear is rescued by Wannamake, a trainer held the baby bear in the shaft and handed him to the actor while holding on to the bear's harness. In a subsequent report from the zoo, a black bear is seen standing against the front wall of an exhibit and growling. He is responding to his trainer's commands. Several trainers were always on hand when the bears worked. The dancing bear report early in the film is stock footage of a dancing bear at the Moscow Circus. Another video interlude featuring a dog is used in the film to show what the insomniacs watch when failing to fall asleep. In the video a man is reunited with his dog and the dog puts his front paws on a chain link fence and barks. For this scene one trainer released the dog off camera while a second trainer cued the dog to come and to speak, rewarding him with food. Later in the film, Trina writes an infomercial involving a sheepdog, Ruffles, who jumps up onto a kitchen counter and eats the food props. For this scene one trainer released the dog off camera and a second trainer, behind the counter, called the dog and assisted Ruffles up onto the counter. The food props were doctored with cat food which the dog liked to lick. Other animals seen briefly in the film were some cows in a corral at a political barbecue.