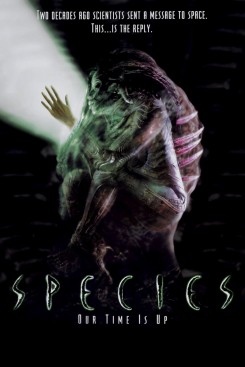 Sil is the product of alien species whose DNA is cross bred with that of human DNA. As an alien infiltrated the planet, it was captured and government scientists began their experiments. Sil was created with astounding strength and growth rate. We first see her as a young girl in her "bubble" where she is kept and studied. She is dressed in pajamas and has wires attached to her head and body. Unfortunately, the experiment has gone wrong which leaves them no alternative but to exterminate Sil. We see two scientists in protective clothing carry in two tanks of cyanide. As the cyanide is released, we see Sil getting weaker until we can no longer see her because of the clouds of gas. In the next instant, Sil breaks through the bubble and escapes. Her strength and her speed put Sil so far away from the premises, that it is impossible to catch up with her. She hops a freight train and when a drunk sits up, he screams and scares Sil. The next scene we see is the drunk dead on the floor of the car. The next time we see Sil, she is disembarking from a train at Union Station, downtown Los Angeles. She has aged to early twenties and is walking in downtown Los Angeles. As she walks along, she sees pregnant women and babies and decides she must breed with a human. By this time we learn that she can morph herself into an alien creature when she feels threatened and kill for her own survival. The search for this dangerous alien begins.

When Sil first escapes, the K-9's are released to search for her. In both scenes, the angry dogs are running on leashes held by their human partners in simple A - B action. The dogs were from an actual K-9 Unit of the Jordan, Utah Police Department and had been trained by their police partners. In another scene, we see a television which shows stock footage of man riding a bull in a rodeo. Throughout the film Sil flashes back to previous problems in her life. In one scene, we see worms crawling all over each other. The prop master positioned the worms on a table. The camera was tilted with a zoom lens and it covered the entire frame. The prop master had obtained the worms from a pet store. When the scene was completed, the prop master took the worms home and released them in his garden. In another scene, Laura, one of the specialized scientists involved in the search for Sil, walks down the street and a squirrel jumps out of the tree on her. For this scene, one of the trainers stood in for the actress and wore a wig. Peanuts and other squirrel food were placed in the wig, enticing the squirrel who had been trained to jump. Sil has a baby, who turns into a monster and then back to a human again. In the cavern where the baby is delivered, a rat crawls around nearby. When the baby sees the rat, it lashes out for it with its monster tongue. This scene was filmed in cuts. When the baby first sees the rat, it is a real one. Then when the baby's tongue lashes out for it, an animatronic rat was used. After the scientists manage to shoot and kill the baby, it all but disintegrates, leaving only a few remains. We then see a rat eating the remains. In the next scene, we see the rat grow and bare its teeth. An animatronic rat was used for these scenes.