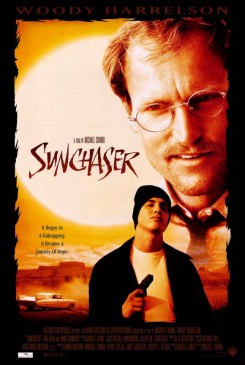 Sunchaser is a drama about Brandon Blue Monroe, a sixteen year old half breed Navajo who has spent most of his life in and out of trouble with the authorities. He is presently in the maximum security wing of the Norwood Youth Facility, for killing his stepfather. Blue also has cancer and is frequently taken to the area hospital for treatments. It is on one of his visits to the hospital that he meets Dr. Michael Reynolds, an oncology specialist. Blue overhears Dr. Reynolds inform some colleagues that Blue only has a few weeks, possibly a month to live. After hearing that, he decides to escape and find a Navajo medicine man at the magical lake high in the Arizona mountains. Dr. Reynolds has Blue transported to another hospital so he can run a few more tests on him. Blue is in the police squad car behind Dr. Reynolds car when he fakes being ill. When the deputy stops to check on him, Blue pulls the deputy's gun and holds him there until he sees Dr. Reynolds stop. Then he kidnaps the doctor and proceeds on his journey to find the medicine man. At first Dr. Reynolds is a reluctant kidnap victim. However, by the end of their journey he is eagerly helping Blue to attain his last wish before dying. He even goes so far as to steal drugs from a hospital pharmacy in order to ensure that Blue can make the last leg of the journey. In all his years as a doctor, he had never cared so much for a patient's well being as he did for Brandon Blue Morgan.

There is a scene where Dr. Reynolds and Blue are driving through Arizona and they come upon a road block. Dr. Reynolds sees some Navajo men and women on horse back in an open field galloping along side the road. The group are rounding up some wild horses. Dr. Reynolds pulls off the road and starts driving behind the group of riders and horses. The dust made from the galloping horses, acts as a shield and prevents the police from seeing the car. To further help Blue and the doctor, the Navajo's follow above a ravine that the doctor drives the car through. Some distance down the ravine a group of horses cross from one side to the other, causing a lot of dust to be blown around. The dust from the horses again acts as a shield and they succeed in eluding the authorities. The horses used for this scene were obtained from local residents. In another scene, Dr. Reynolds and Blue have stopped the car and are arguing on top of a mountain. Dr. Reynolds takes a step backwards and fails to notice the coiled rattler on the ground beside his leg. The rattler is heard and then seen striking the doctor's leg. After striking his target, the rattler is seen slithering away into the brush. In an earlier scene, Dr. Reynolds's daughter is seen running around a corner to greet her grandmother with her two puppies following behind her. For this scene, the puppies were placed on their mark. On action, the trainer holding them, released the puppies who went around the corner to where trainer #1 waited to retrieve them. Other animal action includes a dog seen in the distance sitting outside the medicine man's home. The dog stands and is heard growling as Dr. Reynolds' gets out of the car. In a few other scenes, an eagle is heard and seen flying in the air. There is also a short scene when Dr. Reynolds and Blue meet the medicine man and a tiny bird is seen in the palm of his hand. American Humane was on set to monitor some of the animal action. But due to changes in the Sunchaser shooting schedule, we were unable to monitor all of the horse action.