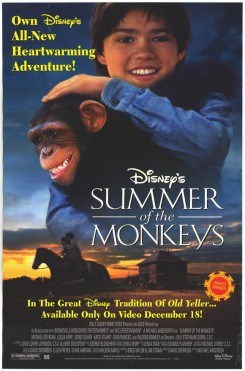 Summer of the Monkeys

Summer of the Monkeys is a film about Jay, a young boy who discovers 4 chimpanzees who have escaped from a circus group after a train crash. Jay learns that there is a reward for the chimps, and sets out to capture them, in hopes of using the reward money to buy a pony. In the end, he does save the chimps, but uses the reward money to pay for an operation for his sister.