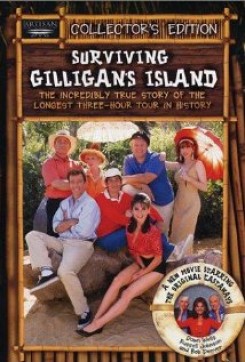 During a re-creation of a western sequence, two riders each ride a horse down a dirt path. One rider dismounts and hands over the reins to the other. The two riders were actually an actor--playing Alan Hale Jr., the Skipper--and a professional wrangler. They gently rode side by side while another wrangler was stationed off-camera as a safety precaution. Later, as Bob Denver recalls the raunchy state of the fake lagoon on the "island," a dead fish bobs to the surface, aptly demonstrating to nearby TV executives the poor water condition and prompting them to change it. The dead fish was purchased by production. No live fish were harmed for this scene. Several flashback sequences feature stock footage of animals from decades past, including a white horse from "The Beverly Hillbillies," two mules and a lion from different "Gilligan's Island" episodes, and a shot of a dolphin mugging for the camera.