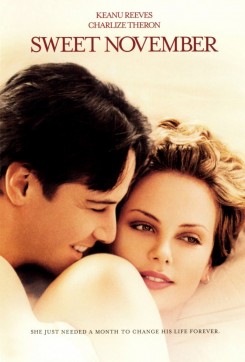 Charlize Theron and Keanu Reeves star in this remake of the 1968 film by the same name. Theron is Sara Deever, an eclectic woman with an unusual mission: to change a man's life in just one month. Her November man du mois is Nelson

Moss (Reeves), an egomaniacal ad exec who succumbs to Sara's charms despite her mysterious motives.

Sara is a dog groomer and renegade puppy snatcher—she dognaps mistreated pooches and finds them new homes. One night she and Nelson steal 2 pups from a lab and take them back to her apartment, where she places them in a pen and feeds them. Three brussels griffons, named Jill, Timer, and Sprout, played the part of the pups, and were cared for on the set by 6 trainers.

Later, Sara and Nelson take 5 large poodles to the beach, where they frolic and play in the sand. Six standard white poodles—Tex, Lily, Bennet, Cindy, Joey, and Nicky—were featured in the scene. Trainers were stationed at different points on the beach and called to the dogs from behind the camera. The trainers sprayed water on their coats to make it appear as though they had went into the ocean before sending them back to the actress.

The aquarium fish featured in Nelson's apartment were borrowed from a local pet store and returned at the completion of their scene.