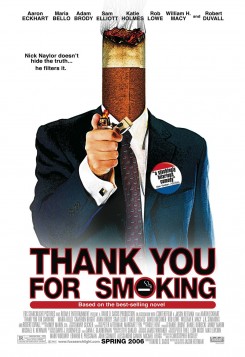 Thank You For Smoking

Nick Naylor (Aaron Eckhart), the chief spokesman for Big Tobacco, makes his living defending the rights of smokers and cigarette makers. When confronted by Senator Finistirre (William H. Macy), who wants to put poison labels on the packaging, Nick goes on several talk shows to put a positive spin on the dangers of cigarettes and even hires a Hollywood agent to promote smoking in movies.

One scene in a laboratory setting depicts a smoky experiment conducted on some mice enclosed in a glass cage. Trainers set up a Habitrail system of modular plastic tubes inside the terrarium for the mice to play in. The cage was divided into two sections by a plate of glass that made each compartment airtight. The section that housed the mice had ventilation holes along the bottom and included bedding material for the rodents' comfort. The water-based "smoke" was inserted only into the empty, airtight section of the terrarium, though it appeared as though it was inside the whole enclosure.

The koi fish seen in one shot actually lived in that pond and were filmed without interference by the crew. The whale seen on television in one brief scene came from stock footage purchased by the production. The seal that a man held in one scene was a prop for which the production provided documentation.