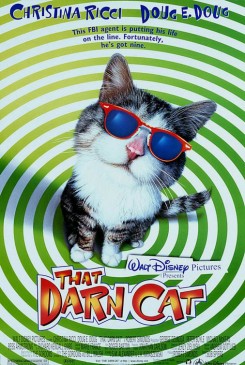 That Darn Cat is a remake of the 1965 version of That Darn Cat. The film centers around Patti, a rebellious teenager, and her cat D.C. (short for Darn Cat) who lives in Edgefield, South Carolina. Edgefield is a small town where everyone knows each other and the town can be especially dull most of the time. Patti longs for some excitement in her life and she gets it when one evening D.C. comes home from an outing, wearing a wrist watch around his neck. The next morning, Patti sees that same watch in a picture in the newspaper on the wrist of a woman who had recently been kidnapped. Patti receives her long awaited excitement, as she and a FBI agent follow D.C. around the city, looking for clues to the whereabouts of the kidnapped woman.