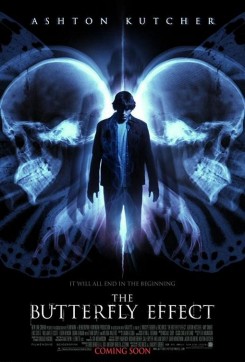 In "The Butterfly Effect", filmmakers explore the Chaos Theory and examine the relationship between cause and effect in each of our lives. Evan Treborn (Ashton Kutcher) is a young man haunted by terrifying events from the past that have created enormous black holes in his memory. Determined to do something now that he was incapable of doing then, Evan purposely travels back in time, his present-day mind occupying his childhood body, in an attempt to re-write history and spare his friends and loved ones these traumatic experiences. By altering the events of the past, Evan hopes to transform the present. However, he soon discovers that every change he makes somehow alters his future.

A dog gets put in a bag and set on fire. Please read on to find out how this scene was really achieved.

In the beginning of the film, Evan plays with his dog Crockett in the yard. The two of them run to the house when mom calls them. Later, the dog begs at the breakfast table as Evan eats some cereal. Evan later feeds the rest of his cereal to the dog. A Jack Russell terrier named Riddle played the part of Crockett, and the young actor and dog met prior to filming so each felt comfortable interacting with the other. Both of these scenes were easy to film. One trainer put the dog on its mark and stood off camera using a combination of verbal cues and hand signals to get the dog to achieve the action.

In a more disturbing scene, Tommy stuffs Crockett in a burlap sack. He ties the end shut, pours lighter fluid on it, then sets the sack on fire. The trapped dog cries and visibly struggles inside the sack. To execute this scene, one trainer placed the dog inside the burlap sack with its head poking out. The actor gently pushed the dog's head inside and tied the end. The director then yelled "cut" and the trainer untied the sack and gave the dog a treat. An animatronic dog was placed inside the sack to create the illusion of a struggling Crockett while Tommy poured on the lighter fluid. The bag was actually empty when it was set on fire, and the growling and crying sound effects were added in during post production.

In one scene, Evan picks up a worm from a container that houses other worms which are part of an experiment he is working on at college. A local pet store supplied and maintained the worms.