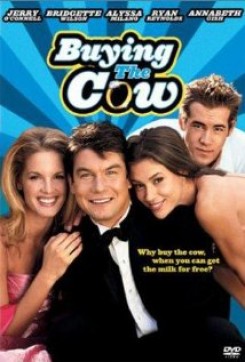 Buying The Cow is a comedy about relationships. We meet a couple who have been dating for awhile. The woman is ready to settle down and marry but the young man is afraid to make a commitment. He keeps hearing the old clich_ repeat in his subconscious; "Why buy the cow, when you can get the milk for free?

There were several scenes of cows standing and grazing in a meadow. The meadow was surrounded by a fence and two trainers stood just off camera. The cameraman filmed the cows for several hours and an editor later cut the footage into the various scenes that were shown throughout the movie. A dog is shown licking chocolate from a bowl in one scene. Gravy was substituted for the chocolate and the dog couldn't get enough of it! In a later scene, a German Shepherd jumps out of a police car and chases a man down an alley and into a house. Through sound effects and editing, the viewer is led to believe that the dog runs into a door and ends up unconscious on the living room floor of the house; while the man escapes. The Shepherd is lying on the floor and a small dog is asleep on the lap of a woman seated on the sofa. The dog jumps off her lap and runs to the Shepherd and begins to hump it. The trainer doubled as the policeman and verbally cued the dog to exit the car and chase the man. The Shepherd is then verbally cued by the trainer to lay on his mark and stay. The trainer used hand signals to get the small dog to jump off the woman's lap and run to the sleeping Shepherd. A waist tie was put around the small dog's middle section and the trainer stood off camera and tugged ever so gently on the tie to simulate the humping motion. A fake Shepherd from the prop department was used for the close up scenes. As we watch a young man run through the woods, he is attacked by a squirrel. The trainer put the squirrel on a tree branch and held out food for it just off camera. The squirrel jumped off the branch to the trainer. A fake squirrel from the prop department was used for the remainder of the scene where the squirrel appears to be attached to the man's neck and is attacking him.