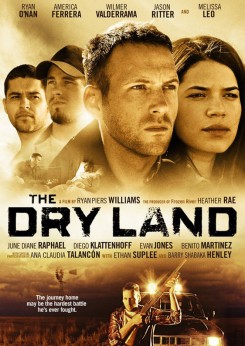 A U.S. soldier returning home from war struggles to reconcile his experiences abroad with the life and family he left in Texas.

American Humane Association Certified Animal Safety Representatives™ were unable to directly supervise the animal action in The Dry Land because this SAG production did not contact American Humane Association regarding the use of animals in their film. The film includes a very intense scene at a slaughterhouse in which a cow is slaughtered on-screen. There is another intense scene with a dead rabbit. A dog is shown throughout the film performing mild actions like walking, running and licking actors.