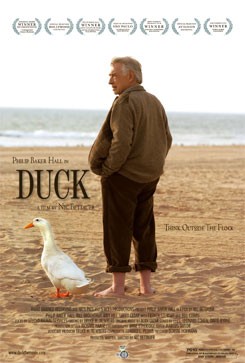 Philip Baker Hall plays Arthur Pratt, an older gentleman who, after exhausting his entire savings to care for his beloved late wife, plans to commit suicide to escape the pain and disillusionment he now feels. That is, until a helpless duckling mistakes Arthur for his mother and gives the man something to live for again. Together Arthur and his duck friend "Joe" set off on a journey in search of a haven from the cruelty that plagues our society in the not-too-distant future.

As the film's title character, Joe the duck was played by six mature birds that could pull off the different actions called for in the script. Some ducks liked being held; others did not, so these were used for the agitated duck scenes. To accomplish this, the actor simply loosened his grip and the duck flapped its wings, thinking it could get away.

Joe first appears in the movie as a duckling. Baby ducks instinctively follow movement, and therefore they trailed after the actor wherever he went. During filming, the trainer had everyone on the set hold still and the duckling naturally followed Hall. Two handlers remained just off-screen at all times and provided Hall with explicit instructions concerning the safe handling of the duckling.

For all filming at the run-down park, American Humane's Certified Animal Safety Representative on the set made sure the area was cleared of any hazardous debris. During scenes with the young duckling, trainers kept the birds' crates in a heated area and all crew members were kept back to not distract "Little Joe" as he worked. Shots of Joe running from A to B through the woods were achieved by placing the duck's crate at an end mark and calling him toward it with a buzzer.

In one scene, Arthur drops Joe off for a swim while he collects trash. When the duckling walks toward the water, the other ducks leave. Trainers released six background ducks into the waist-deep pond and strung a rope across the water to keep them close to the edge. When Joe waddled toward the water, one trainer shooed the other ducks so they would swim away. For safety, handlers were in the water with catch nets, and the ducks were cleaned and dried as needed.

When city workers try to drain the pond with Joe still in it, they throw rocks at the duck to get him to leave. A camera trick made this look like these were close calls, but the rocks never came near enough to hit the duck. When firemen arrive soon after to help evacuate Joe, they bring a dog. The trainer stood off-camera behind the animal control workers cuing the dog to speak, while two trainers walked on either side of the duck, just out of frame, with catch nets to wrangle Joe if needed. The dog was restrained with a leash at all times and was never close to the duck.

Joe has two encounters with garbage in the film. In one scene, the duck gets his head caught in a loop of a plastic six-pack ring that still has one soda can attached. Later, he walks down Hollywood Boulevard with bits of trash stuck to his foot that trail behind him. The remaining can had been drained of soda, and the ring slipped over the duck's neck had been stretched to make it loose. Production adhered to a limited number of takes, and the duck showed no signs of discomfort while wearing the ring around his neck for these brief periods.

The trash on his foot was attached with rubber bands, which he wore only momentarily until Arthur picked him up and walked out of frame. The tub used to clean off Joe's foot at the nail salon was filled with lukewarm water and had been sanitized. For the duck's safety on busy Hollywood Boulevard, two trainers had catch nets at the ready, and puppy pens were used to block his path. Vehicle traffic was not near the duck.

Arthur and Joe share a philosophical moment at the Venice canals toward the end of the film, when the duck hops into the water below the bridge. Safety precautions for this scene included having portable fencing in the water under the bridge and a production assistant in a canoe to keep away any errant, wild ducks. A trainer wearing waders remained in the water to position the duck close to the shoreline so the actor could step in and gently pick up Joe. On the director's cut, trainers took the duck back from Hall until the next shot was set up with Arthur seated on the bridge holding the duck, supposedly just after the "rescue.

When Arthur and Joe finally make it to the beach, they encounter their old friends, Norman and his seeing-eye dog. The dog was on a harness and Hall held Joe the entire time. The duck, having been raised with humans, had no fear of the dog. And the dog was extremely well-trained, focusing only on his work and being completely oblivious to the duck.

The BB gun fired near the duck by Daryl, the boy in the park, was not loaded and shot only CO2; the gunshot was a sound effect added later. Arthur's knapsack was outfitted with a flat bottom and had a safety harness on top to comfortably support the duck. The drunken woman at the Halloween party who gets sick on Joe actually spit a combination of water and soup. Trainers rinsed off the duck immediately on cut of the action.