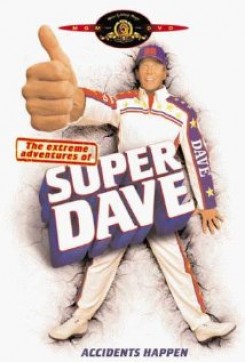 Extreme Adventure of Super Dave, The

The Extreme Adventure of Super Dave is a slapstick comedy about a dare devil stunt man who has seen better days, but is challenged by a young prot_g_ who wants to replace him, to do one final "extreme" stunt.

In one scene Super Dave, Sandy and Timmy are riding in a horse drawn carriage. There was one horse used, and the action consisted of the horse walking from A to B. During this same scene, Super Dave supposedly catches a bee in his hand, and it stings him. However, we don't actually see the bee, we only hear the sound effect of it buzzing in agitation. In another scene, Super Dave runs inside a burning house to save Timmy's dog. The dog turns out to be a stuffed animal, however Super Dave does find a bowl of fish, which he throws out of a window and smashes on the ground. In the final scene where Super Dave is going to do his major stunt, the windshield on his car breaks. A squirrel flies at the car, straight into Super Dave's mouth. Super Dave pulls the Squirrel out of his mouth and throws it out of the car. The squirrel bounces on the hood and then falls away from the car. The squirrel in this scene is a fake, purchased by the production for this film.