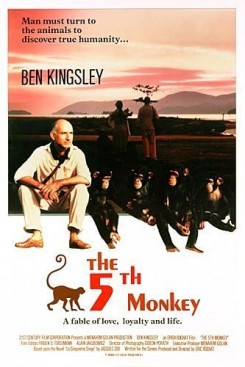 Set in Brazil, The Fifth Monkey portrays in fable fashion a simple man, Cunda, who earns money capturing snakes, butterflies and other creatures and selling them to an animal exporter. One day as he is scanning the countryside for prey, four chimpanzees appear, then disappear again. Cunda thinks he must be hallucinating since chimps are not native to that area. When they appear again and are friendly, Cunda decides to take them to Sao Paolo where he can sell them for so much money he will be able to wed the lovely Maria. As the five of them make their journey on foot, they experience adventure and romance and a bonding Cunda never expected.

A variety of South American animals are seen throughout the film. American trainers handled only the chimps. Brazilian trainers handled all other animals. There is a very brief scene as Cunda enters a treacherous mining camp where a few men are wagering on a cock fight. The birds had no weapons attached to them. There was no bloodshed and the birds were not harmed in any way. Trainers played miners and were close enough to pull the birds apart, if necessary. It was not necessary as the scene was filmed quickly.

When Cunda and the chimps arrive in Sao Paolo, one of the chimps is stolen and sold to a research lab. Cunda breaks into the lab to rescue the chimp and finds the chimps and other animals attached to tubes. The tubes were not inserted into the skin, but attached by taping or tying with bandages. For the chimp's dying scene, he was not sedated but was taught to put his head down and stay still.