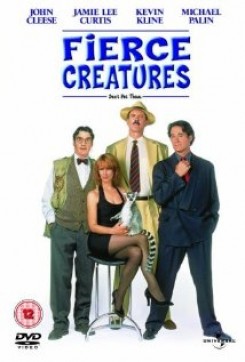 Fierce Creatures is a comedy about a small zoo in England that has been taken over by Octopus, a large American conglomerate run by Rod McKane. The zoo's present director is Rollo Lee, and at its present state makes a modest profit. However, it is not large enough to satisfy McKane. Therefore, he sends his son Vince, a marketing genus, and Willa Weston, a customer relations executive, to England in hopes of increasing his profits. What transpires next is a conspiracy on everyone's part from the animal handlers, to Rollo, to Willa, to Vince, and finally McKane, to do what they think is in their best interest. Of course Rollo, Willa, and the animal handlers want to keep the zoo open however, that is not the opinion of McKane especially after he finds out that Vince has been stealing funds from the zoo's profits.

Animal action is throughout the film with the use of several different species of zoo animals. The film was shot in England at the Pinewoods Studios. The zoo scenes were shot on a replica zoo set built inside a studio sound stage. The animals had over four months prep time at the studios, just getting used to each other and the props they were to use on the set The animals were never used longer than 20 minutes at a time. All proceeds raised at the charity premiers were to be given to the Lemur Release Project. In one scene several zoo trainers are seen entering Rollo's office carrying their animals in cages. They place the cages on the director's desk and inform him that he can dispose of the animals if he wants them put down. Later Rollo is seen in his bedroom with the animals all over his bed as he talks on the phone. A lemur is seen jumping at him while he is trying to pull the other animals off of his face etc. All of the animals were loose on the bed together except for the coati, which they used an anamatronic. There is a scene where Rollo is seen hiding the animals in the bathroom when someone approaches his bedroom. The animals are seen exploring everything. A lemur is seen jumping at the toilet chain and something is seen falling out of the medicine cabinet. The animals were prepped prior to filming. The object seen falling out of the cabinet was actually a very light weight soft plastic cup. In a scene towards the end of the film, a lemur is in a cage in the office and he grabs a gun lying nearby. The gun is heard going off and other lemur's in the cage are seen jumping around. The lemur is not seen actually firing the gun. There are several scenes throughout the film where animals are seen being carried from one point to another by actors. The animals are either in the actor's arms or in cages. Other animal action consists of a tarantula seen crawling from A to B across the desk and onto a man's finger and an ant eater is seen in a crate. There is also a scene where a spider is seen crawling on a shelf in a closet, down the closet door and on a couch. Later a man is seen picking up the spider from the floor. In another scene a dead wasp is seen on an orange and a trainer picks it up and opens his coat pocket, revealing a tarantula inside. There were no real gorilla's used in the film, it was actually a stuntman dressed in a gorilla suit. Fierce Creatures was a Foreign Production filmed entirely in England. The animal action was monitored by the RSPCA.