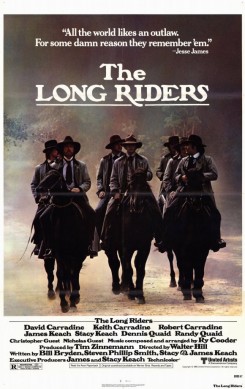 Another version of the infamous Jesse James story.

AHA was not informed of the animal action prior to filming but confirmed via screening the film on May 19, 1980 that two obvious horse trips occurred. In one fall, a horse landed on its back and in the other fall, the horse did a dangerous forward somersault. Since it was deemed that these falls could not be achieved without the use of tripping wires, AHA rated the film Unacceptable.