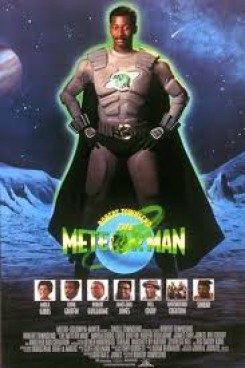 The Meteor Man is a social satire set in a black ghetto of Washington D.C. The film's hero, Jeff Reid, is an elementary school teacher. He lives in a neighborhood that is so totally taken over by drugs and gangs that the decent people live in a state of perpetual terror. One night he tries to rescue a woman from a gang, but ends up fleeing for his life. He eludes the gang by hiding in a garbage dumpster until he feels it's safe. As he climbs out of the dumpster into the alley, a mysterious emerald meteor appears in the sky over the alley and falls on Jeff, crushing his spine and leaving him unconscious with third degree burns. He's hospitalized, but days later when he awakens and his bandages are removed, there are no signs of any burns and the doctors are amazed that his spine has healed completely. Jeff discovers he has other powers too, such as x-ray vision and super strength. When he touches a book, he retains all knowledge in that book for 30 seconds, and, best of all, he can actually converse with his dog, Ellington. When he confides his new powers to his parents, they convince him to use his special gifts to do good deeds and to fight the evil in their neighborhood. Mom stitches up a spiffy costume for her son, the savior, and Jeff embarks on a series of misadventures as "Meteor Man".

Ellington appears in numerous scenes. When Jeff arrives home from the hospital and is greeted by a barking Ellington, Jeff can understand what Ellington's barks mean and barks back at him in doggie language. (Subtitles interpret their conversation for the audience.) In this scene the dog was responding to his trainers verbal and visual commands. As thugs are breaking into Jeff's apartment, Ellington tries to arouse a sleeping Jeff by barking. When Jeff doesn't respond, Ellington drags Jeff out of bed and behind a sofa and then hides him from the thugs by covering him with clothes. This scene was shot in cuts. The dog responded to his trainer's verbal and visual commands. The actor was placed on a dolly so that the dog could easily pull him across the floor, which he had been trained to do. The trainers talked the dog through each article of clothing that he fetched and then deposited on the actor.