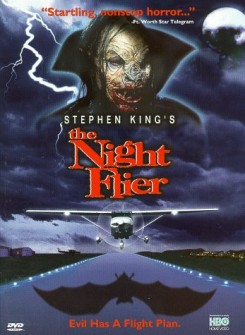 Stephen King's: The Night Flier is a film about Richard Dees, a reporter for a trashy tabloid called the Inside View. Dees is investigating a story about a man named Dwight Renfield, who preys upon his victims in small, isolated airfields during the night, leaving them behind decapitated and blood drained.

While investigating the site of the most recent murders, Dees encounters a dog lying on top of a motor home. The dog growls at him and then stands, watching his every move. When he makes a run for his car, the dog is seen running across the trailer roof and down a stack of hay towards the vehicle. After making it to the car, Dees looks back in the direction of the trailer and the dog is still standing on the top, as if he never moved. The scene was shot in cuts with the growling of the dog inserted during post-production. The trainer used verbal commands to cue the dog from A to B. The hay was stacked from the ground to the top of the motor home in a stair like pattern. Other animal action consists of a few scenes where maggots and worms are seen crawling in piles of dirt inside and under an airplane. There is also a dog seen being walked on a leash from A to B.