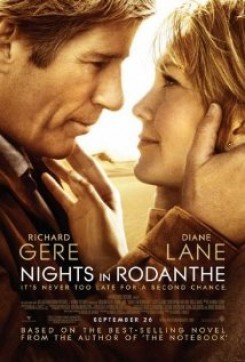 Adrienne Willis (Diane Lane) retreats to the tiny coastal town of Rodanthe, N.C., to tend a friend's inn for the weekend. A major storm moves in, and her only guest, Dr. Paul Flanner (Richard Gere), helps her with the inn, and helps her make some major decisions about her life and her unhappy marriage.

As Adrienne (Lane) is walking along the beach, several horses run past her. A special fence was temporarily erected to prevent the horses from leaving the filming area. Wranglers led horses by halters and lead ropes to three release pens and then waited with the horses. Several other wranglers waited in catch pens where the horses would end up after their run. The horses' halters and ropes were removed right before filming and were put back on after the horses ran. Hay and water were placed in all the pens. Grounds were checked ahead of time for safety. Three wranglers mounted on horses remained nearby in case any horses decided to wander. Police blocked off the area and only necessary cast and crew were allowed to be there.

Birds and seagulls were filmed in their natural habitat.

Production provided documentation that the fish that hangs on the wall in a store was a prop.