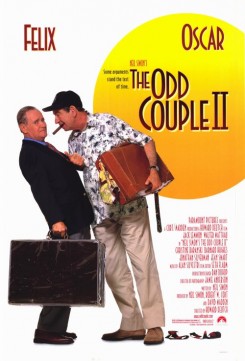 The Odd Couple II Travelin' Light is a sequel to the original Odd Couple film about Oscar Madison and Felix Unger. In the sequel, Oscar and Felix's kids plan to marry each other. The two old men decide to road trip it together from the Los Angeles airport to San Malina. What should have been a few hours drive turns into days as the guys are up to their old shenanigans.

There is a scene where Oscar and Felix are stranded in a car and a crow flys down and picks up a toupee from the road and flys off. A little later a shot is heard and the crow supposedly lands on the hood of the car. The bird was trained to fly to its mark (or hairpiece in this case). The actor shoos the bird away and the bird flies back to the trainer. A fake bird was used for the shot of a dead bird on the hood of the car.

Other animal action consists of a few cats poking around some garbage that has been dumped from its cans. The trainer released the cats from their crates. A safety fence was placed around the area and a buzzer was placed under the garbage, which consisted of soda cans, newspaper, etc. Food was placed in a few locations under the trash. While the guys are tooling down the road they pass a field with some cows in the background.