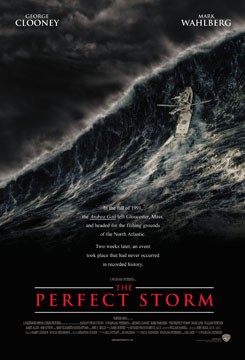 The Perfect Storm is a drama based on a true story. Six fisherman leave their small town to make a late season fishing run aboard the Andrea Gail fishing boat in the fall of 1991. They find themselves in the middle of one of the most horrific storms ever recorded in history.

As you watch this film you begin to wonder what's real and what is not. It is hard to tell. The computer generated special effects created the wind, rain, and 100 foot waves shown throughout the storm. Although the fish looked real, Warner Bros. was able to recreate this fishy tale using only Animatronic fish. Not one real fish was used during this film.

Real Animals Used
The Seagulls that are shown flying in the beginning of the film were filmed in their natural habitat. The dog that stood on the dock next to some kids as the boat comes into town for the first time, is a real dog. The trainer put the dog on his mark and verbally cued it to "stay" as the scene was being filmed. The trainer stood just off camera and retrieved the dog after the scene was over.