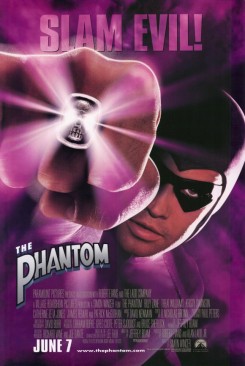 The Phantom is the film adaptation based on the legendary comic book hero. The Phantom is a masked man who lives in the Bengalla Jungle protecting all who live there. The people believe that he has existed for over four hundred years and is immortal. In this version, we learn the true history of the Phantom and the legends surrounding him, as well as his real identity. The pieces of his story are slowly revealed as the Phantom foils the evil Sung Brotherhood in their attempt to gain control of the three Skulls of Touganda. These ancient artifacts are said to hold a power greater than any weapon known to man, but can unleash it only when all three skulls are held together. The evil tycoon, Xander Drax, is not only a member of the Sung Brotherhood, but on a personal quest to find all three skulls and control the power they possess.

The year is 1939 and the film opens in the jungles of Bengalla where the Phantom was introduced to his destiny as a young boy. We soon discover that this is also the location of one of the three precious skulls of Touganda. Looters steal the solid gold skull from its hidden sacred cave and return it to Drax in New York City. In the meantime, a newspaper publisher who is wary of Drax and his motives sends his niece, Diana, to Bengalla to research the mysterious Sung Brotherhood. She is kidnapped by Drax's men, but saved by the Phantom, beginning an adventure and a love affair. The Phantom follows Diana back to New York where they are unable to stop Drax from acquiring the second jade skull. With two in his possession, Drax is led to an island in the south seas called the Devil's Vortex where he expects to find the third skull and the key to ultimate power. However, Drax finds the Phantom a formidable opponent. The Phantom discovers that he alone can direct the power of the skulls and destroy Drax in the process.

When we are introduced to the Phantom in the jungles of Bengalla, he is riding a powerful white horse, Hero, and accompanied by his pet wolf, Devil. The Phantom pursues looters who have robbed the sacred cave and taken the first of the three skulls of Touganda. As he chases them, he rides Hero through the dense jungle, jumping over logs and shooting at the thieves while Devil runs close behind. After the Phantom downs one of the thieves, Devil stands guard over him. Once the thieves are arrested, Hero and Devil are seen being tended by a young boy while the Phantom meets with a British officer. For this scene as well as the following scenes where the horse and wolf are seen together, several wolves and horses were extensively trained together in pre-production and comfortable working together. Only trained jumping horses were used throughout the film.

Diana arrives in Bengalla, having been kidnapped by the Sung Brotherhood who are working for Drax. Devil is seen running up the ramp of the ship where she is being kept captive as the Phantom arrives to save her. Devil jumps up onto one of the bandits and knocks him down. We see him standing over the man growling. For this scene a trained stunt man doubled for the actor and a second trainer was on hand. The wolf responded to a verbal command and jumped at the actor in play. When the wolf is seen growling, the second trainer was standing just outside of camera range waving a bone at the animal which encouraged the wolf's natural possessive and aggressive tendencies toward the bone. The animal was immediately given a food reward.

The Phantom and Diana escape the ship and end up fleeing in a small plane. Devil then goes off to tell Hero where to find their master. The wolf alerts the horse by spinning around and then jumping straight up into the air. Hero rears up as if to answer him. This behavior was taught in pre-production training. The animals run through the jungle in pursuit of the airplane. The villains go to a small corral to saddle up some horses, hoping to chase down the aircraft and recapture Diana. We see the Phantom's riderless horse at full gallop running under the path of the plane. The horse was trained from birth to run at liberty without a rider. When the Phantom spots Hero below, he climbs out onto the pontoon of the plane encouraging Diana to follow. We first see the Phantom leap from the aircraft onto the trusty steed, landing directly in the saddle on Hero's back. He beckons to Diana who follows suit landing behind the Phantom as Hero continues to gallop forward. This complicated sequence was shot in many cuts. Camera angles, special effects, as well as computer enhancement in post production are all used to create the look of a dramatic seamless stunt. When the actors are seen landing in the saddle of the horse, they actually leaped only a few feet from a pontoon mounted on a crane that was attached to a camera car traveling next to the horse. They did not actually leap from the plane. There was also the use of a split screen technique, whereby the plane and the horse are photographed separately and later compositied into a single frame in post production. Along with these techniques used on location, the horse was also filmed in a studio against a blue screen while running on a treadmill and then edited into the shot as if running very close to the plane.

The villains on horseback shoot at the super hero and Diana, but they ride away unharmed. The Phantom has native friends in the jungle who manage to lower ropes that lasso the villains, lifting them off their galloping horses and into the trees. The riderless horses run off into the jungle. For the safety of the horses, pick up riders were waiting just off camera. All of these horses were raised as a herd and responded to anchor horses which led the herd in the needed directions. At the end of the sequence we see that Devil has caught up to the Phantom and Diana who ride together atop Hero.

Later, back in New York City, the Phantom arrives in his civilian identity as Kit Walker, whom we learn was an old school chum and romantic interest of Diana. As Kit, the Phantom hopes to get to the second jade skull before Drax. Unfortunately, Drax succeeds in stealing the second artifact from the museum. Now in possession of two of the skulls, he is able to learn the location of the third and finally hold the power after which he lusts. Drax also manages to take Diana captive a second time as he escapes the museum. Kit finds it necessary to become the Phantom, chasing Drax through the city. In this pursuit, the hero steals a police horse and rides through traffic and the park at full gallop, jumping hedges and bushes while being chased by two police officers on motorcycles. He finally does a running dismount and hides in the tiger cage at the park zoo. When the police approach the cage the tiger first snarls and then leaps at the bars. After they leave, we see the Phantom come out of hiding and quietly walk past the tiger, as if a friend of the animal. The chase sequence was shot in many cuts and traffic was stopped. The filming of the motorcycles was done separately from that of the horse action. For the initial leap from the car to the back of the horse, the actor jumped a very short distance from a stationary car while a trainer in costume held the horse. The horse used for the chase was a trained jumping horse and was ridden by a professional stunt man. For the scene with the tiger, two cats were used. To get the tiger to jump onto the bars, a trainer stood out of camera range holding a pole onto which he had attached food. The cat jumped at the bars to get to the food and was given the food as a reward. A second tiger was used to portray the snarling cat because it was a naturally more aggressive animal. Four trainers were on hand and the set was cleared of any distractions and excess personnel. When the actor is seen passing the cat peacefully, a trainer was just off camera, very near to the actor holding the attention of the cat who was immediately given food as a reward.

Once the Phantom tracks down Drax and his men, he follows them to the island known as the Devil's Vortex. There we see secret caves that we learn are the lair of the Sung Brotherhood and the location of the third skull of Touganda. We also see a shark infested moat surrounding the inner sanctum of the Brotherhood. During a fight sequence, the Phantom throws the Sung leader to his own sharks. For these scenes animatronic sharks were used.

American Humane was present for the pre-training of the horses and wolves and was on set for the filming done in the United States. The jungle action was filmed in Thailand and although we were not present on set, AHA discussed the scenes with the trainer prior to them being shot to assure that American Humane Guidelines would be followed. We are giving The Phantom a dual rating. The work filmed in the United States is being rated "Acceptable." The work filmed in Thailand is being rated "Believed Acceptable."