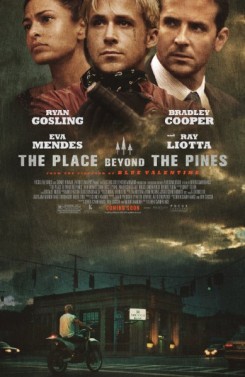 Place Beyond the Pines, The

A professional motorcycle stunt rider pulls off a series of burglaries to support his wife and baby.

In this taut independent drama, the American Humane Association was there for a few scenes involving dogs.

In the scene where an actor throws a ball and a dog chases it, the dog was accustomed to playing ball with her owner. Set was closed off to outside traffic.

When the dog sits with actress near a small river, trainers were just off camera to make sure dog remained still. Likewise, when the dog sits in the actor's lap, the dog was introduced to actor before shooting, so she felt acclimated.

When the actor chases ducks in a field the ducks were there naturally.

Due to late notificaton, American Humane Association did not monitor the scene where the actor dances with the dog.