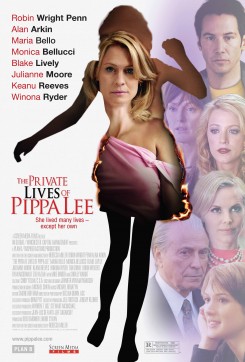 Private Lives of Pippa Lee, The

Pippa Lee (Robin Wright Penn) is married to an older man (Alan Arkin) and is beginning to question her life and how it got to be in the shape it is in.

In a dream sequence, Pippa follows a long leash to a wooded area where a lion is lying. The lion looks at her and when Pippa looks again, the lion is gone. For this scene, only a limited number of cast and crew members were allowed on the set. The grounds were checked for hazards ahead of time. A trainer put the animal on its mark and cued it to lie down under a shady tree. Once the lion was settled in, the crew entered and kept a safe distance away. The scene was filmed in separate shots: First, the trainer doubled as the actress, holding a steadicam camera as she followed the leash to the lion. Later, the actress was filmed without the lion present. The two pieces of footage were edited together. The lion's trainer controlled a chain attached to the lion's collar on one end and to a cable on the other end. The cable was secured to the lion's trailer. (The lion was transported to the set in a trailer.) The trainer stood just off-camera holding the chain.

Due to late notification or scheduling conflicts, American Humane did not monitor any of the dog action.