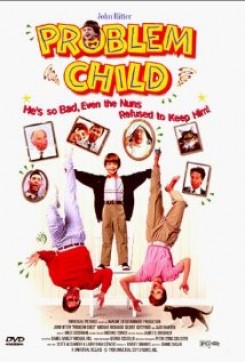 Problem Child is a comedic Bad Seed. Ben and Flo, a childless couple, adopt Junior, a seven year old who is the worst kid in the world. Junior's idol and "pen" pal is a convicted killer. Ben, who has an overbearing wife and father, had hoped Junior would fill a void in his life as Ben has always wanted a son. Despite all of Ben's efforts, Junior seems to be a hopeless cause creating one castrophe upon another. When the killer escapes from prison, and heads straight for Junior's home, an interesting turn of events occurs.

When "Fuzzball", the family cat leaps at Grandpa, the cat clings to Grandpa's face, causing him to fall down a flight of stairs with the cat clinging to his face the whole time. This scene was shot in cuts using a real cat and a fake one. The actor first held the real cat in front of his face, then the fake cat was used. In the next scene, "Fuzzball" has his legs in splints which were actually veterinarian splints that were cut to give the cat better control and less stress. In one scene, Flo tosses her cat on the sofa and the cat meows in reaction to her roughness. The actress feigned the roughness and the meow was added to the soundtrack in post production. For the camping scene, a man in a bear suit was used and edited with scenes filmed with a docile pet bear. A variety of exotic animals are used in the circus sequence. Although much of the comedy in this film is derived from situations that put animals in jeopardy, during the actual filming no animal is mistreated. Indeed, exceptional care was taken by the trainer, director and film crew to assure that the animals were treated humanely and with consideration for their comfort. Most of the filming was done in the Dallas, Texas area and Bobby French, a cruelty investigator with the Dallas S.P.C.A., an affiliate of American Humane was on the set for the animal action. To quote Officer French, "Dennis Dugan, showed me that as long as he is directing a movie with animals involved, there will be no reason to fear for the animals. He is an animal lover and would not place any in a situation that would cause them any harm. I found nothing during the time I was on the set that I feel was abusive or cruel treatment of the animals. I wish that all directors, film crews and animal handlers were as good as I found these people to be." After taking such extraordinary care during filming, we were dismayed when the promotion for Problem Child began. The publicity department at Universal Studios distributed posters nationwide showing a cat in a dryer and a child laughing at the cat's predicament. Similar stand-up displays for the theatre lobbies were also distributed. Apart from the fact that no such scene was ever filmed, and was untruthful, we felt the ad promoted animal abuse and said so to Roger Armstrong, Vice-President of National Publicity for Universal Studios. We had hoped that the offensive advertising would be withdrawn. This was not done and although Mr. Armstrong originally discussed adding some form of disclaimer to the ad, he apparently discarded that idea and did not return any of American Humane's subsequent phone calls. His response to a newpaper columnist who inquired about the misleading posters, was that they are "in the spirit of the film". American Humane has no authority to censor and can only deal with the actual treatment of animal actors, but we feel that this was a major blunder on the part of the publicists for the film. Because the treatment of the animals during filming was so exceptional, we are rating Problem Child "Acceptable". If we were to rate the promotion of this film, however, it most definitely would be "Unacceptable".