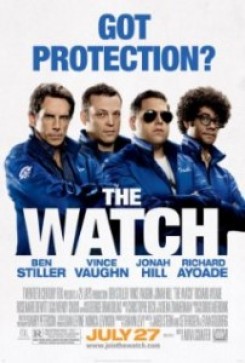 A misfit group of suburban dads and husbands start a neighborhood watch group only to realize their true enemy turns out to be an alien invasion.

This unusual blend of sci-fi and comedy has plenty of laughs and thrills for fans of both genres, but very little in animal fanfare.  No Animals Were Harmed were on set, though, and our Representative said it was nothing short of a great time!

The only scene that really explodes off the screen so-to-speak is when the four main characters shoot a cow with a laser gun which subsequently explodes. Most of this scene was done through CGI. First, trainers led cows out to graze in a field. Trainers were just off camera making sure cows were relaxed, getting acclimated to environment. They took shots of the cows then cut camera. The next night, they loaded the cows in a trailer and drove them at a safe distance from the set. They then placed a plastic cow in the field and detonated it. The rest was done in post to make it look like the plastic cow was alive when it exploded.

The dog in the background was merely caught in its natural habitat.