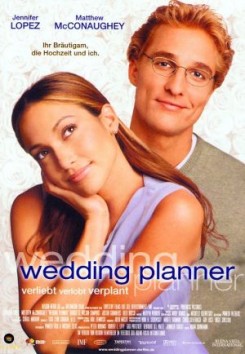 Making her romantic comedy debut, Jennifer Lopez stars as Mary, a wedding planner who finds herself forever a bride's helper and never a bride. Her staid life gets a romantic and professional boost when she meets Steve, played by Matthew McConaughey, and lands the biggest job of her career both in one day. Yet she soon discovers that her stroke of good luck is too good to be true.

At the country club, the family and wedding party ride down a trail on horseback. They talk to each other as their horses follow the trail. Suddenly, Mary's horse rears up and takes off galloping down the trail with Steve chasing right behind her. Steve finally catches up and helps her get off her horse and onto his. Mary's horse gallops off by itself as the others riders surround them, and they all proceed down the trail.

There were seven trainers and a veterinarian on the fenced-in set at all times. The trainers helped the actors mount the horses and stood nearby during filming. A stunt-rider rode Mary's horse when it reared up on cue and took off galloping. A professional rider also played Steve in pursuit of Mary's horse. The other actors on their horses were about fifty feet behind the rearing horse and trainers surrounded the animals. The run-away horse galloped to several trainers waiting off-camera.