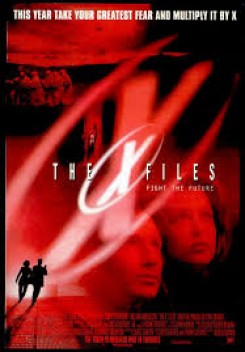 Mulder and Scully must fight the government in a conspiracy and find the truth about an alien colonization of Earth.

Over 300,000 bees were released in one scene and then enhanced by computerized digital imagery.

They were wrangled by Dr. Norman Gary who has studied bees for over 50 years.

During filming, the bees were transported in specially designed box cages and fed sugar syrup and water and sprayed occasionally to keep them cool and from dehydrating. A synthetic pheromone that replicated the scent of the queen bee was used on nets to gather the bees after filming along with a gentle vacuum device.

All worker bees are female and drones are male. The drones mate with the queen bee once and then die. Bees have a 35-day life-span, although the queen can live for 1 to 2 years. When bees die in the hive, other bees called house-cleaners carry the body away from the hive and drop it off.

Bees that had died of natural causes were used in scenes that appeared to put bees in jeopardy. In the random selection of thousands of bees used in the film, it was expected that at least 2%-3% would die of old age daily.

Although insect repellant was applied to the actors, it was also to protect the bees as well. Should a bee sting, the barbed end of the sticker becomes lodged in the skin and cannot be removed. The bee pulls away leaving the stinger behind and creating a fatal wound.