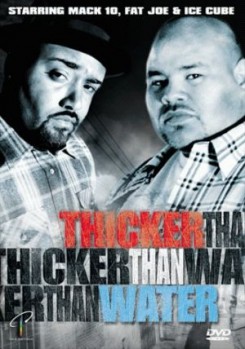 Thicker Than Water is the story of two gang members, Lonzo and D.J., who start out as enemies and claim the same piece of neighborhood turf. They later learn that they have more in common than merely turf. Not only are they real "blood" brothers, who share the same father, they also have the same dream of becoming record producers. They hit some dead ends while attempting to break into the music business and decide the only way to make their dreams come true is to fund their own recording company. They turn to selling drugs, so they can one day live life outside the "hood". However, life in the hood is one that is violent and selling drugs only one of their illegal activities. They also promote dogfights where Pit Bulls are set against each other in a fight to the death. Not everyone gets out of the hood alive.