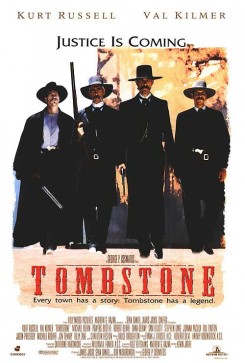 A successful lawman's plans to retire anonymously in Tombstone, Arizona, are disrupted by the kind of outlaws he was famous for eliminating. The film depicts circumstances leading to the famous gunfight at the OK Corral and goes beyond that event. The personal loves and lives of the lawmen are explored as they endeavor to rid the area of the outlaws and to stop the terrorism.

There is much action involving horses throughout the film. There are numerous horse falls and horse rearings which were all performed by trained falling and rearing horses. These trained horses were brought to the Arizona shooting location from Los Angeles. For each horse fall, the ground was properly prepared In some of the horse rearing scenes, as the horse reared, its rider would fall from the saddle onto the ground. These stunts were all performed by professional stuntmen. The plot of the story involves numerous gunfights and in all cases where animals were present in the scene, quarter loads were used for the gunfire and cotton was placed in the animal's ears. The sound of the gunfire was augmented in post-production.

In an early scene, horses are led off a railroad car by way of a ramp. The ground all around the ramp was softened as an added safety precaution. A man slaps one of the horses, which was not done hard and was done to keep the horse going in the proper direction. There are many scenes where horses pull either wagons or stagecoaches. Professional drivers were used in all instances.

Wyatt is attracted to a lovely actress by the name of Josephine and a romance begins. The pair ride their horses through pastures and woods and their horses make a small jump over some fallen tree limbs. Much of this riding scene was filmed with expert riders doubling for the actors. The horses were trained jumping horses.

Horses are a part of the action during the gunfight at the OK Corral. There is much gunfire, of course, and quarter loads were used with the sound augmented in post-production. Horses were also protected with cotton in their ears. A cowboy uses a horse as a shield during the gunfight and the horse rears and falls over. This was supposed to be just a rear, but the horse accidently fell after rearing. Since the ground was already dug up and softened for other planned falls, the horse was not injured.

In a later scene, a horse jumps through a saloon window from the outside into the saloon. The horse was trained for this particular stunt by first walking through the area where he would be jumping. He then jumped through an empty window. A clear plastic sheet was added which was very loose. As they continued jumping the horse through the window, they would make the sheet a little bit tighter each time. This went on over a period of days until the horse was properly trained to jump through the window. For the filming, candy glass was used, which is not glass at all but is a very fragile material which breaks very easily. There is no danger of an animal or person being cut by the material. This scene is part of a confrontation between Wyatt's men and The Cowboys. There's much gunfire and several horse stunts with stunt riders falling from their horses. There are numerous scenes of fast riding throughout the film and in all cases the ground was properly inspected and cleared of any potential hazards to the horses and their riders.

In other animal action a pet dog is present in several scenes in primarily basic, mild action. The dog responded to his trainer's hand and voice cues with food as a reward.

Cattle are also seen in basic, mild action which was achieved by wranglers herding the cattle into a specified area and then releasing them. The cattle run to an area where fresh hay awaited them. Hay was also placed in key areas to keep the cattle in a desired location.