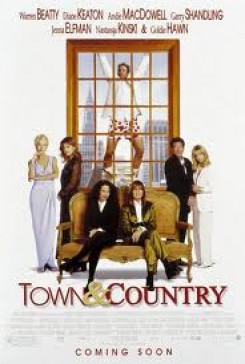 In this comedy, we meet a couple that has been married for a very long time. They decide to separate after the wife suspects her husband of having an affair. She finds comfort in her best friend's husband and begins having an affair with him.

Two dogs portray the pets of one of the families. The first time we meet the dogs they run into the house and stand by the maid. As the son exits the room, the two dogs follow him. The trainer set the dogs on their marks and verbally cued the dogs to run to the maid and stay. The trainer stood off camera and used a hand signal to have the dogs follow the actor out of the room.

There is a scene where the two dogs walk alongside Diane Keaton on the beach. The trainer verbally cued the dogs to follow the actress and stood off screen until the scene was over.

In two different scenes, a horse pulling a carriage goes by. The street was closed off to traffic and the trainer doubled as the actor and drove the carriage.

A flock of geese were filmed waddling alongside the road. The street was closed to traffic and the trainer put the geese on their mark and stood just off camera as the scene was being filmed. The trainer retrieved the geese after the scene was over.

At the end of the film, one of the dogs plays ball in the yard with an actor while another dog sits by the chair. The trainer verbally cued one dog to stay sitting by the chair and the other to follow the ball.