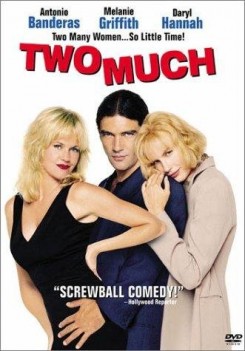 Two Much centers around Art, a Miami Beach art dealer/con-artist, who becomes romantically involved with Betty Kerner. Betty is the ex-wife of Gene Kerner, a very wealthy Mafia gangster, who, having married and divorced Betty twice, is obsessed with getting her back once again. The real trouble starts when Art begins to take an interest in Betty's younger sister, Liz. Art is a struggling artist who will go to any lengths to sell a painting. One of his favorite tricks is to go through the obituaries to obtain addresses of upcoming funerals. He arrives at the funeral and approaches the grieving widow with a painting. Art informs the widow that her recently deceased husband put a down payment on the painting, which was being bought for her, and he has come to collect the remaining balance. Most of the time the women are so touched, they pay Art his asking price and accept the painting, which is usually hideous. He is in the process of doing exactly this when he realizes he has picked the wrong funeral to attend. This funeral is for a Mafia Don. His sons, one of whom just happens to be Gene, makes it quite clear to Art that he has made the ultimate faux pas by trying to con their mother. Art barely escapes with his life. He races out into the street and is almost run over by Betty in her Rolls Royce. The thugs are hot on Art's trail, so Betty allows him to jump in her car, aiding him in his escape. They speed away and end up spending three days together in a motel on the coast. Betty, very wealthy after both of her divorces from Gene, believes she has fallen in love with Art and decides that he is going to marry her. This is fine with Art, as he has nothing better to do and could use Betty's money. Betty, giddy with excitement over the impending wedding, returns to her mansion with Art in tow so she can introduce her new love to her younger sister, Liz. Upon meeting Liz, Art falls instantly in love with her. Art has to figure out what to do now. He's engaged to one sister, who has a jealous ex-husband in the Mafia, but he's in love with the other sister, Liz, who can't stand him, thinking he is just using Betty. One day while Art is at his studio, Gene and two thugs show up. In order to save his own neck, Art quickly puts on a pair of glasses and takes his hair out of its usual ponytail and introduces himself as Bart, Art's twin brother. Since it worked so well with Gene and his cronies, Art is convinced it will work with Liz as well, and well it does. Art, as Bart, begins to dig a deeper and deeper hole for himself, courting both sisters until it comes right down to the wire,...the wedding day. Through a very humorous and chaotic series of events, all parties involved wind up with the right partner. Gene with Betty and Art with his love, Liz.

Animal action is mild. Liz's dog, Buddy, is present in several scenes. He sleeps, is petted, lays on the bed, and plays ball with Bart. All of the dog's actions were accomplished by simple hand and voice commands from his trainer, with food as a reward.