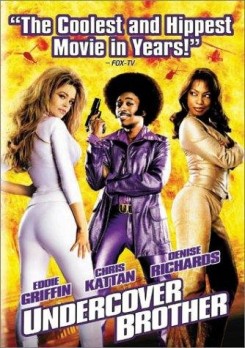 Secret Agent, aka Undercover Brother, Anton Jackson (Eddie Griffin) is a soldier on the front lines in the war against “The Man.” Adding to the film’s camp is Chris Kattan, who plays the evil villain Mr. Feather.

Two police dogs patrol the grounds in one scene. Doubling as policemen in the scene, two trainers each held onto the leashes of an 8 year-old male and a 6 year-old female German Shepherd. The trainers walked the dogs on their leashes and verbally cued them to sniff the location as they walked. Several pigeons flutter by briefly in one scene. Trainers brought 8 homing pigeons to the set and released them. The birds were trained to return to the trainer on a verbal command, and as homers, were also banded with identification.