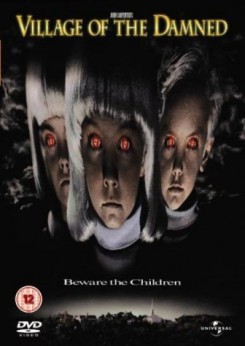 Village of the Damned

Village of the Damned is a remake of the British 1960 science fiction classic. This chilling tale about a race of zombie-like, telekinetic children simultaneously born to the women of a small northern California coastal community could be conceived as a chiller with undercurrents of Communist paranoia. With ease and dispatch we are acquainted with the key locals in the close-knit town: its doctor (Christopher Reeve), school principal (Linda Kozlowski) and clergyman (Mark Hamill) all of whom are likeable, intelligent and unpretentious types. This laid-back quality of life is suddenly interrupted when a black cloud covers the town and every living creature loses consciousness, dropping in their tracks -- humans and animals alike.

The animal action was achieved as follows: the dogs playing dead were controlled by voice command and hand signals. The supposed dead canary was a taxidermy. Dummy cows and horses were utilized for the scenes where the animals are affected by the dark cloud that crosses over the small northern California community. Puppets were used for the cows as well as real cows getting up and lying down. The camera was reversed to make them get up and/or down. Also, taxidermied cows were used. The bird death scene was done in cuts. The live bird was seen first, and then the dead stuffed bird. Into an atmosphere charged with conflicting emotions arrives a federal government epidemiologist (Kirstie Alley) who suspects that the women have been impregnated via xenogenesis (aliens). All 10 women become pregnant, resulting in a mass birthing nine months later.. The new-born infants begin to demonstrate deadly telephathic powers, including the ability to read the minds of their elders. The youngsters, who seem to share a common mind, are like ultimate Hitler Youths -- single-minded, blue-eyed, blond Aryans They are in special classes at school, and on their own begin practice sessions in domination. Many suicides follow as these bizarre children prepare to seize control of their parents and the town.