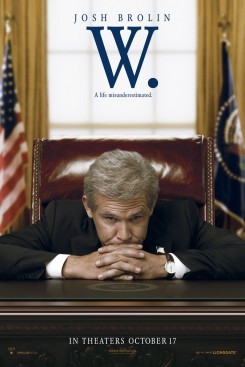 George W. Bush's (Josh Brolin) life is chronicled, including his upbringing under the guardianship of George Sr., and his trials and tribulations before and during his role as president of the United States.

As the president walks in a field with his two dogs (Barney and Spotty) and some of his cabinet members, a cowboy on horseback herds some cattle nearby. An experienced cattle herder doubled as the actor riding the horse, and the horse and cattle were kept at a safe distance from the dogs. The rider, horse and cattle were all experienced with this action. Pickup riders were also nearby in case the cattle wandered off, which they did not. Trainers stood just in front of and behind the actors and dogs and gave commands to get the dogs to follow the group of actors as they walked.

In a couple of scenes, one or both of the dogs lie on the furniture while being petted. A trainer placed the dog on its mark and then stood nearby, using verbal cues and hand signals to get the dog to stay and look in various directions or jump down. The set was closed and inspected ahead of time and was limited to only necessary cast and crew members.

The president is in the yard throwing a ball for both of his dogs to fetch. Barney is happy to bring the ball back to the president, but Spotty walks over near the ball and sniffs as if he is looking for it. The president comments that the dog's eyesight is going bad. This scene was filmed on a private golf course in front of a green screen so that the White House could be digitally added in later. Although the actor was tossing the ball for the dogs, the dogs were actually obeying the commands of the off-screen trainers. The dog that played Spotty had perfect eyesight — he was merely cued to sniff around and ignore the ball.