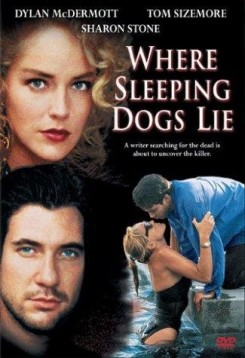 Where Sleeping Dogs Lie is a violent horror story about a psychopathic killer. Bruce, a struggling young writer, is moonlighting as a real estate salesman. Being unsuccessful at both, Bruce is evicted from his residence due to non-payment of rent. With nowhere to turn, he decides to set up house in an old mansion he is supposed to be selling. He learns that the house was the scene where the unsolved murders of the "perfect urban family" took place. This gives Bruce the idea for writing a story "The Diary of a Murderer". As Bruce struggles to outline his new story, Eddie Hale, a very meek young man who is supposedly a grocery store manager, arrives to ask if he can rent a room from Bruce. Bruce agrees and Eddie becomes Bruce's close friend. Eddie, claiming to have a photographic memory, seems to know everything about the murders and aids Bruce with his new book. One morning, when Eddie does not come out of his room to go to work, as a favor Bruce calls the grocery store to inform them Eddie would not be in that day. Bruce then learns that Eddie lied to him and does not work at the store. The next morning when Eddie leaves for work, as was his usual routine, Bruce searches Eddie's room. He comes across a cassette tape and turns it on, only to be horrified by the sounds of blood curdling screams... the screams of the murdered family! When Bruce confronts Eddie with the evidence, Eddie confesses, claiming to be "the angel of sorrow". Bruce calls the police, but by the time they arrive, Eddie has, once again, disappeared, along with the cassette. That evening Bruce finds an unfamiliar cassette tape in his room. As he listens to it, he realizes that Eddie has gone to see Bruce's sister and her "perfect urban family". He races to his sister's house to find that she and the family are fine, but that Eddie had stopped by to visit and left a belated birthday present for Bruce with them. Bruce opens the present to find a bible with a note..."Keep the faith".

Animal action was limited to one scene where a hawk was in a tree eating something that was non-descript. The hawk was actually eating chicken meat purchased from a local butcher store.