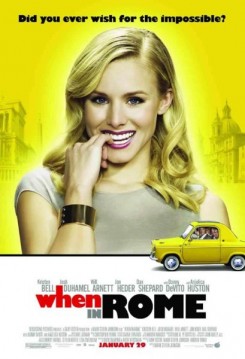 While in Rome for her sister’s wedding, frustrated and single Beth (Kristin Bell) steals some coins from the "fountain of love." The men who originally made wishes on those coins then mysteriously stalk her, causing her to have to figure out who really loves her and who is under a spell.

Horses are seen pulling carriages in New York. As they walk forward, oncoming traffic approaches. In one scene, Antonio (Will Arnett) runs across the street, trips over a carriage hitch and falls to the street. Later, this same scenario takes place again, only this time Nick (Josh Duhamel) jumps over the carriage hitch and clears it without tripping. For these scenes, trainers walked carriage horses to their marks  near oncoming cars driven by stunt drivers, who only drove a few feet and a safe distance from the horses. The horses were accustomed to the action and the traffic noise. A board was bolted to the hitch area between the horses and the carriage, and a well-rehearsed stuntman replaced the actor for the jumping and tripping portions of the scenes. He jumped onto the board so as not to put pressure on the horses. The horses were also cued to walk from one point to another for about 10 feet, at a safe distance from all vehicles. The carriage drivers were either the horses’ usual drivers or costumed stunt drivers. The carriages that were not “tripped over” contained passengers, but the one with the special hitch had no passengers. The street where these scenes took place was closed off to the public, and all scenes were well-rehearsed.

The policemen seen riding horses near the Roman fountain were real policemen on their own horses simply performing their usual action, which was mild.

Pigeons that are seen flying, walking around or perched in Rome and in New York were coincidentally caught on camera in their natural habitats. In one scene, pigeons landed on one of the actors, which was another coincidence, as the production was filming in an area where birds interact freely with humans. The doves that fly out of the magician’s coat as he’s hovering outside an office window were computer-generated.