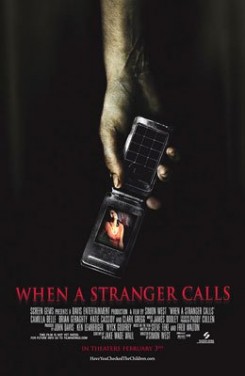 When a Stranger Calls

Although babysitter Jill Johnson (Camilla Belle) is at first entertained by the modern amenities of the Mandrakis family’s palatial home, a series of mysterious phone calls makes the teenager realize that the low-key evening she had anticipated is about to become a living nightmare.

This film met the Guidelines established by American Humane, received the Monitored-Acceptable rating, and was awarded the "No Animals Were Harmed”® End Credit Disclaimer.

The  Mandrakis home has a spectacular courtyard aviary with a koi pond, and several scenes in the film take place here. Trainers supplied the production with a total of 200 finches and canaries, which were released in small groups as the scenes required. The aviary had netting on top to prevent escape, and trainers used catch nets to retrieve the birds after each shot wrapped.

During filming, hidden spotters on the ground made sure no birds landed in the water. Birds were given time to rest between takes, and any bird appearing tired or stressed was pulled from the action. The aviary was equipped with a misting device that turned on periodically along the length of the windows. Trainers did not release any additional birds once the misters were on, as some birds loved the water, while others flew to the trees to avoid the light spray.

The Safety Representative monitoring this production requested that all crew take care to watch their step while working in the aviary with loose birds. When the Safety Rep noticed holes in the upper netting, she immediately talked to production about sealing the tears and allowing ample time to collect the birds after each shot.

Fish experts were brought in to care for the koi, and they performed all appropriate water tests before putting the fish in the oxygenated pond. When Jill (Camilla Belle) discovers Rosa the maid’s body in the pond, mechanical rubber koi swim around Rosa’s body. No live koi were in the water when Jill kicked over the bridge with the stranger on it.

The Mandrakis’ cat, Chester, is sometimes seen observing the birds through the living room window. Trainers placed the cat in a sit-stay position to perform this mild action. In a later scene, birds have flown through the open door and perch on furniture and statues inside the house. Meanwhile, Chester has apparently killed two birds and is munching on one of them amid loose feathers that litter the area. The perching birds were kept in place with monofilament attached to leg bands, and one trainer per bird stayed just off camera at all times. Trainers prepped the birds extensively with the tethers, and only birds which were comfortable wearing the monofilament restraints were selected for this action. Chester was not present while the birds worked, and only fake birds were used in the shot with the cat. Chester’s sinful snack was a prop bird smeared with baby food.

In the opening sequence, an extra walked a trained dog on leash through the fairground and neighborhood.