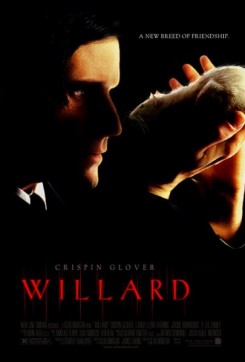 Crispin Glover plays Willard, a social misfit. He takes care of his mother and lives a very secluded life. Willard is constantly humiliated in front of his co-workers by his boss, Mr. Martin, who was his deceased father’s partner and who makes it clear that Willard’s job is only secure while his mother is alive. Willard befriends some rats that take up residency in his basement and soon discovers that he can train them to reap revenge.

Different species of rats were used throughout the film. Eight White Rats were on call for the part of Socrates and six Gambia rats were on call for the part of Ben. The rats were each taught different behaviors and had ample time for extensive training. The other rats, which were plentiful, were called Brown Rats. Although they all looked similar, there were two different kinds of rats. There were 250 sitting rats and 300 working or running rats. The rats did exactly what their names tell you. In numerous scenes rats are seen sitting on the counter, in cabinets, on stairs and many other places. Sitting rats were used for those parts. The running, or working rats as some people refer to them, were used when the rats were shown moving. And in most scenes both types were used. Many trainers as well as veterinarians were on hand throughout the production to ensure the safety and well being of all of the animals. All of the rats were coded with a number in ink under their tails. This way the trainers were  always able to identify them. Replicas of the two stars, Ben and Socrates, were made by the prop department and substituted for the stars in certain scenes, which are explained below. There were also several animatronic rats made especially for this production.

All areas were fenced off and trainers were plentiful off camera. The basement stairs were specially built by production so that each step was unusually wide and placed further apart so they could accommodate the large number of rats that were on them in several scenes. Rats were always alternated in scenes so that they had plenty of time to rest. All rats were counted before and after every scene to make sure they were all safely accounted for using the numbered code for identification. Camera Angles, motion cameras and cameras on dollies all helped to enhance the illusion of rats, rats, and more rats. Cardboard fencing was used to place the rats right before the scene began. This would help the rats to stay properly positioned before the cameras rolled. When it was time for the director to call “action”, trainers would remove the fencing and the rats began to act!

Rats are seen inside a vent in the wall. Willard talks to them and feeds them. A wall was specially built for the production and a vent was built inside it. The vent was padded for comfort and the grate on the front of it was made out of chicken wire. A trainer placed a few rats inside the vent and stood off camera. Food had been scattered before hand and the actor also fed the rats some food, as he talked to them.

Socrates, a white rat, gets stuck on a glue trap and Willard helps to remove him by pouring some cooking oil on the animal. Willard wraps the rat in a towel and when his mother comes to the door, puts it inside a drawer in the bathroom cabinet. When mom leaves, Willard dries the rat off and combs its hair. A children’s product called “Alien Slime” was used for the sticky substance on the trap that captures Socrates. It is non-toxic and its main ingredient is a thickener that is used in milkshakes. The trainer and the actor rehearsed this scene several times to ensure the rat’s safety and comfort. Most of the slime was put on the actor’s hand as he removes the rat from the paper. The actor poured a small amount of vegetable oil on the rat, which is also non- toxic and safe. A trainer stood nearby at all times to make sure the rat was comfortable and didn’t ingest either the oil or the slime. As soon as the scene was over, the trainer bathed the rat, dried and pampered the animal. The actor gently placed the rat in a towel and set it inside a drawer. The rat was taken out of the drawer immediately afterwards. Socrates sat very happily in the actor’s hand as he combed his fur.