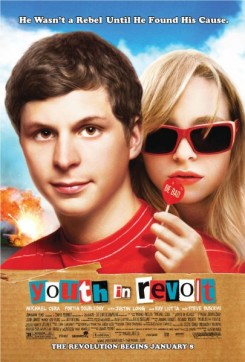 Nick (Michael Cera) is a typical teenager with only one thing on his mind: how to get his dream girl, Sheeni Saunders (Portia Doubleday), to be his first sexual experience.

The part of Sheeni's dog, Albert, was played by a terrier mix named Oscar. Throughout the film, the dog is seen performing such mild action as sitting by a table, on a bed or in an actor's lap; being held; walking around; or lying on a blanket. For these mild scenes, a trainer placed the dog on his mark and stood off-camera, cuing the action and using a bait stick or a toy to get the dog to look in various directions. Before filming began, the actors and crew were all introduced to the dog and instructed on how to handle him properly. The grounds were checked ahead of time for hazards.

When Sheeni first picks out her new dog, she goes to an enclosed pen on grass and looks at some puppies that are running around. One jumps up on the side of the pen. Sheeni picks up the dog and holds and kisses it. All of the puppies were introduced to each other before filming began and the actress was again instructed on proper handling. Trainers placed the puppies inside the fenced, secured pen after inspecting the area and making sure it was safe and comfortable for the animals. The trainers stood just off-camera and allowed the puppies to do whatever came naturally.

In a few scenes, the dog is placed inside Nick's backpack. The backpack was large enough to accommodate the dog comfortably. The dog and the actor were well-rehearsed for this action. The dog was only ever in the pack for a few moments and then removed.

Albert is also seen riding in a moving car in a couple of scenes. Those scenes were filmed on a stage in front of a green screen, and at no time was the car actually moving. When the car runs out of gas, the dog is shown briefly in the beginning of the scene and then replaced with a stuffed prop, because the actors raise their voices a bit and the trainers did not want the dog to be startled by the yelling.