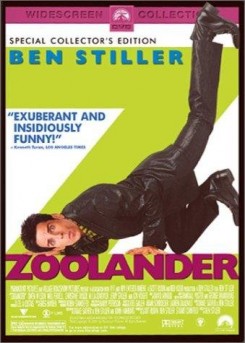 Ben Stiller plays Derek Zoolander, a shallow, self-obsessed male model who has recently lost his post as the top model. Forced to find a new perspective on life, Derek decides to rediscover his roots and prove to himself that there's more to life than being beautiful. Somewhere along his botched path of self-discovery, Derek is brainwashed into assassinating the president of Malaysia

One of the top fashion designers in the film, Mugatu, is never without his small white poodle, whom he dresses in snazzy outfits and a matching wig that perfectly coordinate with his own. The part of the dog was played by a ten year-old female poodle named Kiva. Two trainers and a veterinarian were on set at all times. The dog was comfortable wearing the outfits and wig, which were specially made to custom fit the dog. Yet despite her fashionable threads, Kiva preferred to go au natural, and her trainers obliged by helping the dog out of the outfits between scenes. In addition, the actors and crew met the dog before filming began to acclimate Kiva to the set environment and obtain from her a final bark of approval—she will only work under strict pampering conditions. In fact, the dog was so comfortable that sometimes Kiva managed to catch a few winks as the scene was being filmed—a common occurrence among older lap dogs.

One of Kiva's more alert moments happens while Mugatu poses for photos holding her and woman suddenly throws an egg at them. The egg hit the actor and broke on his chest. Although the dog was not hit by the hard egg, some of the broken egg splashed onto Kiva's wig. The trainer removed the dog's wig and washed it and re-styled it, but the dog itself had no egg debris on it. AHA is aware that an MTV Ben Stiller Special airs this scene in slow motion, claiming to show the egg hitting the dog. The dog's trainer confirmed to AHA, however, that the egg did not hit the dog. The trainer further stated that the dog was not affected by the egg debris and is doing very well.

In another scene, Mugatu places the dog on a man's shoulder as he leans over to speak to him. This was well rehearsed and both trainers were standing just off-camera to supervise.

In one scene, a goat is led on a leash through a room. The goat's name is Pete and he is three years old. Since the goat was very familiar with walking on a leash, the trainer only had to put the collar and leash on the goat and practiced with the actor a few times before filming.