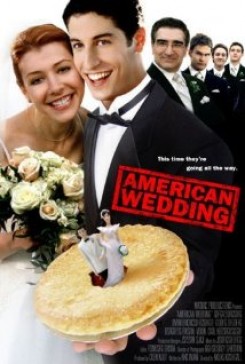 Cake is on the menu for the American Pie gang, who reunites for the second time in American Wedding to celebrate Jim's (Jason Biggs) impending nuptials to his band camp sweetheart Michelle (Alyson Hannigan). While the guys do their best to keep their nemesis Stifler (Seann William Scott), from ruining the blessed event, Stifler has his sight set on Michelle's pretty sister Cadence (January Jones), and he goes to great (and often gross) lengths to impress her.

Michelle's parents, Mary and Harold, bring along their two beloved dogs, Rudy and Sara, to stay with them at Jim's folks' house for the festivities. As invited members of the wedding party, the two scene (and cake) -stealing pooches mostly hang out with Jim and his family, occasionally witnessing wild antics and, of course, trying to steer clear of Stifler, who suddenly takes a keen interest in the dogs' potty habits.

Pampered pets Rudy and Sara arrive at Jim's house, and Rudy bounds down the hall and jumps onto Stifler, who happens to be covered in cake following a tug-o-war with Jim. While Rudy eagerly licks the cake off of Stifler's pants, Jim tries to pull the dog off of Stifler. Adding to the chaos is the little Pomeranian, Sara, who joins in on the action by excitedly humping Jim's leg. A large Briard named Stevie played the role of Rudy while spunky Pomeranians Sashie and Bandit shared the role of Sara. To prompt Stevie to eat the cake off the actor's pants, the pants were outfitted with pockets that were filled with creamed chicken. The trainer placed the dog over the actor with the special pants and cued him to eat off of them. Trainers also instructed actor Jason Biggs to properly lift the dog's hind quarters to simulate pulling the animal off of the other actor. The experienced Pomeranian was trained to hump on command, and stood on a small booster shelf to keep her at the right height.

After the cake fiasco, the dogs are washed off by the guys. Trainers placed the dogs on their marks while the actors gently wiped them with towels.

Eager to impress his future in-laws, Jim explains to them why he'll make a good husband to their daughter while they sit on a couch with the dogs. Trainers placed the dogs on the couch and stood behind the camera to hold their attention and to cue Sashie to bark during his speech. Later, the dogs repeat the mild action when they quietly sit on a couch next to Jim's bachelor party strippers.

The family heads off in cars to drive up north for the blessed event. The big dog sits in the back seat while Mary holds the Pomeranian in her lap in the front seat. Trainers securely placed the dogs inside of the slow-moving car.

En route to the wedding, Stifler and Cadence pass a squirrel on the side of the road as it nibbles a treat. Two tree squirrels named Peter and Larrie brought the road-side nibbler to life, with a stuffed stunt squirrel as back-up. The trainer released Peter onto the blocked-off street and Peter scurried over to his yogurt-covered mark, where he mugged for the camera before running back over to the trainer.

Still working to win over Cadence, Stifler affectionately tosses treats to Rudy and Sara while strolling through the park and the dogs happily run to retrieve them. True to form, Stifler also accidentally tosses the wedding ring he is holding onto for Jim, and it sticks to a dog treat. The Pomeranian approaches the treat with the ring stuck to it and appears to eat it. The dogs happily accepted the treats from the actor. The treat with the ring attached was filmed without the dogs present, so there was no chance of them actually swallowing it.

Determined to get the ring back from the dog, Stifler sits on a park bench staring at the dogs as they sniff the grass, waiting for the ring to turn up. Finally, the Pomeranian has to relieve herself, and the ring miraculously appears. Production patiently waited for Sashie to naturally do her business and finally caught her in the act.