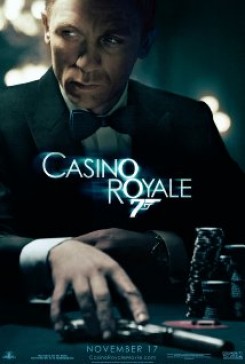 The Bond franchise gets rebooted with Casino Royale, which introduces Daniel Craig as the rough-around-the-edges British spy newly promoted to 00-status.

Because Casino Royale was filmed internationally, the production company made arrangements for American Humane's Certified Animal Safety Representatives to supervise the animal action on location in the Bahamas. American Humane applauds productions that commit to the humane treatment of the animals in their films even beyond our borders, and encourages other producers filming internationally to make the same commitment.

During a scene that takes place in Madagascar, a crowd gathers around a fight between a cobra and a mongoose in a large, empty swimming pool. This intense sequence required a seamless blend of movie magic, special effects and carefully choreographed live animal action. The filmmakers used a banded Egyptian cobra and made sure to have the appropriate antivenom and a specialized nurse nearby at all times. Reptile wrangler Jules Sylvester provided a safety briefing to the crew, and all unnecessary individuals were asked to leave the set while the snake worked. As a precaution, the production informed the local venom center and medic every day the snake was on set, and police and the Bahamas Ministry of Agriculture were present at all times during filming.

Though the footage seems to indicate otherwise, the two live animals never worked together on the set. A stuffed ferret and a latex or animatronic, radio-controlled snake were used for rehearsals and lighting, as well as for some interaction shots from afar. Four neutered polecat ferrets were used interchangeably as the mongoose in this sequence. Trainers positioned a ferret against a green screen and cued the animal to look up and around by waving a spoonful of baby food attached to a long pole. Toys were dangled above the camera to elicit some of the ferret's jumping shots. The ferrets were limited to two takes each and then alternated.

Three handlers were present with the cobra at all times. Sylvester placed the cobra on mark on a wooden platform covered in green felt. As in the case of the ferret, this technique allowed the filmmakers to erase the green material and add in special effects during post-production. After the snake settled into the area, it started to face the camera and slither around. To attract the cobra's attention and make it raise its hood, Sylvester used a cloth cap on a pair of snake tongs and gently waved this around the camera lens. No animals were present when a stuntman ran across the green screen platform, and no one on the set was allowed to move until the reptile was returned to its transportation container.

American Humane was unable to personally monitor the mild horse action in the film. According to executive producer Anthony Waye, Solange's (Caterina Murino) horse came from a riding stable in the Bahamas and stayed overnight at the local zoo. Also, for a scene filmed in Eastern Europe, the horse and carriage seen briefly in one scene were professionals usually hired by visitors for tours around Karlovy Vary, Prague. They were hired directly and not through an animal handler.